John Harbaugh Promises Courtney Upshaw Will Be In 'Fighting Shape'

Courtney Upshaw didn't attend the Ravens' visit to the White House so he could get in extra hours of cardio.

After Thursday's practice, he immediately hopped on the stair master, then had a meeting with the team nutritionist, and finally chatted with a member of the strength and conditioning staff to outline his weight-loss plan.

Upshaw's got some pounds to shed, as both he and now Head Coach John Harbaugh have noted. He is up to 285 pounds after being listed at 272 last season.

But Upshaw is putting in the work to lose it.

"I'm working, man. I'm working real hard," Upshaw said Thursday. "It's anything to try to get me down. It's frustrating to not see my weight go down knowing I'm putting in all that work."

He first pointed out that Upshaw is "playing very well." He said the second-year outside linebacker understands the defense exceptionally well and is working really hard. Then Harbaugh dove into the weight.

"Courtney's weight issue – which he does need some pounds – is that he doesn't eat right," Harbaugh said. "Courtney eats too much and he doesn't eat all the right foods.

"He knows that and that's something he's going to have to get a handle on, or he's not going to be the best he can be. But he's aware of it. Everybody in our building is involved with it. He'll be in fighting shape, I promise you that."

Upshaw had a similar struggle with his weight last season and eventually worked it off. He responded with a strong season with 16 games played, nine starts, 60 tackles and 1.5 sacks.

"It's frustrating because I had to go through the same thing last year. But I did it," Upshaw said. 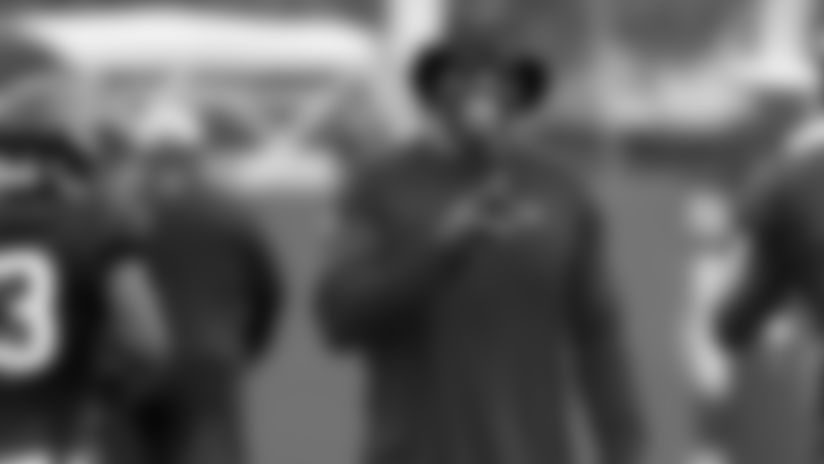 Baltimore is bringing back Anthony Weaver, who was drafted by the Ravens in 2002 and last served as the Houston Texans' defensive coordinator.

A standout at Clemson, Deon Cain was a sixth-round pick of the Indianapolis Colts in 2018 and spent the past two seasons with the Pittsburgh Steelers.

Head Coach John Harbaugh said he expects cornerback Tavon Young to be ready for OTAs and Ronnie Stanley and Nick Boyle back by training camp.

John Harbaugh Would Like to Add a Big, Physical Wide Receiver, But He Isn't Begging

There will be a lot of talk about adding a free-agent wide receiver this offseason. But does it make sense financially and who would be a good fit?

Bills Mafia's Donations Nearing Half a Million in Support of Lamar Jackson, Blessings in a Backpack

Ravens running back Mark Ingram said he's 'looking forward to [his] next opportunity' and thanked the organization, fans and teammates.

After Lamar Jackson was knocked out of the divisional playoff games with a concussion, Bills Mafia sent their well wishes.

Baltimore will retain quarterback Tyler Huntley and other rookies to groom this offseason.

The Ravens have some tough decisions to make with two of their leaders and most productive players on their respective sides of the ball.

The Ravens quarterback talked about being proud of his team and said he'll be back (and better) next year.

NFL Network's Ian Rapoport reports that Baltimore may look to get a deal done in the Spring or early Summer. Where could the deal land?

The browser you are using is no longer supported on this site. It is highly recommended that you use the latest versions of a supported browser in order to receive an optimal viewing experience. The following browsers are supported: Chrome, Edge (v80 and later), Firefox and Safari.