Round 5: Ravens Select WR Jordan Lasley at No. 162

Ravens General Manager Ozzie Newsome said Friday night that he liked the way the team's wide receiver board was stacked heading into the draft's final day.

He delivered on that statement by taking a pair of receivers Saturday afternoon.

Lasley, 6-foot-1 and 203 pounds, is a talented player who put up major production in college. He caught 69 passes for 1,264 yards and nine touchdowns last year, and earned honorable mention All-Pac-12 despite missing three games due to suspension.

Lasley was viewed as a likely Day 2 pick, but tumbled into the fifth round because of some character concerns and a slower-than-expected time in the 40-yard dash at the NFL Scouting Combine. Lasley was suspended for three games last year after getting arrested for possession of alcohol and presenting a fake ID at a club.

"There were some issues early on in the senior year, but he bounced his way back," General Manager Ozzie Newsome said. "I'll let him tell you what the one quote he said to me about being picked in the fifth round. At some point, he'll be able to tell you that and I hope he can live to what he said to me."

He is considered a vertical threat, but he ran the 40 in 4.50 seconds at the NFL Scouting Combine, which brought up some concerns about his speed. Lasley also dropped 13 passes last year, according to Pro Football Focus.

Lasley's talent is apparent in his athleticism and production, and former Ravens receiver Steve Smith Sr. listed him as one of his most intriguing receiving prospects in the class.

"The UCLA product high-points the ball extremely well and checks all the boxes as a receiver – speed, YAC (yards after catch) and height," Smith wrote. "Plus, he's out of my hometown, so I know he's got that Cali swag. Lasley tends to not be locked in for the full 60 minutes."

Trust me - Jordan Lasley is a first round talent .. he’s a beast another #steal

he's one of those guys where the four of us, we all looked at him, [and] he has an explosive trait about him. 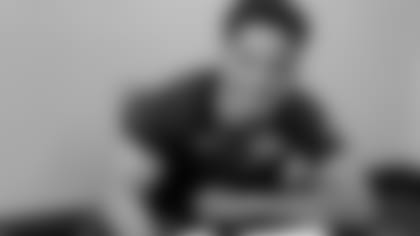 Baltimore has swiftly reached a contract agreement with its top pick in the draft, wide receiver Rashod Bateman.

The Ravens see a high floor with first-round edge rusher Odafe Oweh because of the way he plays against the run.

What Mink Thinks: How Eric DeCosta Played 'The Game' to Perfection

General Manager Eric DeCosta caught a lot of attention for his 'insulted' comments. But did they end up helping to land Rashod Bateman?

Late for Work 5/10: Do the Ravens Still Need Another Pass Rusher?

Marquise Brown is poised for a Pro Bowl season. Eric DeCosta grades the Ravens' draft and more. An update on projected compensatory picks.

Tylan Wallace Has Something to Prove After Sliding in Draft

After watching teams pass on him during the draft, rookie wide receiver Tylan Wallace plans to make them pay.

A versatile tight end/fullback who has also played defense, Ben Mason is cut from the same cloth as Pro Bowl fullback Patrick Ricard.

Why Tylan Wallace is the biggest sleeper pick in the AFC North. Which Ravens players benefited from the draft? The Ravens-Chiefs game is ranked as one of the top matchups of the 2021 season.

Versatility Is a Trademark of Ravens' 2021 Draft Picks

Many of the players selected in Baltimore's 2021 draft class can play multiple positions and handle a variety of assignments.

With the draft in the rear-view mirror and the Ravens' free-agency replacement found, we have a better idea of the players exchanged.

Late for Work 5/6: Ravens Have One of NFL's Most Improved Receiving Corps

Why Odafe Oweh and the Ravens are a perfect fit. Was Alejandro Villanueva really taking shots at his former Steelers teammates? Ben Mason is a Day 3 pick who will make an immediate impact.